After the heartbreak of losing our old cat Amiga to congestive heart failure, our home became far too empty. Soon enough, I found myself in the cat room at The Humane Society. So many cats and kittens of every size and color, and all needed a new home.

Then, I saw her. She was watching me, a half-grown black kitty with sleek, soft fur and intensely green eyes. She lay quietly in my arms, purring with contentment. I didn’t decide to adopt her because she was absolutely gorgeous and regal, or because her coat seemed to be made of a more extravagant material than most cats wear, but rather because of her sweet disposition. With a backyard filled with birds and butterflies, I needed a cat that would be content to live indoors. Once spayed, we brought her home. We named her Kali.

While her eagerness to eat everything in sight suggested that she had been neglected, had grown accustomed to fending for herself, I have never known a kitty with a calmer or sweeter disposition. And what a delight; she constantly amused us with inventive games.

Then, over the Forth of July weekend, we met a man who needed to find somebody to care for an orphaned two-week-old kitten. He thought the mother lived in a colony of feral cats in the woods, and perhaps had been frightened away by fireworks. As soon as I held the helpless little guy in my hands, I knew that we were taking him home.

While the orphan seemed healthy and readily drank formula from a miniature bottle, he cried continually. Kali approached, but the kitten was terrified of the strange cat. He cried and cried until Kali decided that enough was enough. She pawed at my arm insistently, quite plainly saying, “Give him to me.” At first I hesitated, but since I was getting nowhere quieting the baby, I finally did as she asked.

She took hold of the infant, put him on his back, and gave him a thorough bath from head to tail. The kitten immediately quieted and accepted Kali as his new mom.

While caring for the kitten together, Kali and I formed a very special bond. We quickly fell into a routine. Every few hours, I fed and burped our feline infant, then gave him to Kali for a bath. She watched him wobble about on shaky legs, and went to his aid if he seemed in danger of toppling off the bed. We named him Reason.

Soon weaned from his bottle, Reason grew quickly. He continued to look to me for food, but went to Kali when frightened by thunder. Actually, he constantly watched Kali to learn how a cat should behave. Yet they could not have been more different. Kali was sleek and exquisite; Reason was scruffy, shaggy, and always looked a bit wild. By the time he was six months old, he towered over Kali, a big awkward-looking kitten, trotting after his elegant foster mom. Watching them together, it was hard to believe they were even the same species.

Kali didn’t mind. With immeasurable love to give, she proved that even a spayed kitty with an uncertain past could possess great maternal instincts.

Born and raised in Central Florida, Sarah Mankowski has called the Space Coast home for the past thirty years. When not writing, she enjoys edible landscaping and butterfly gardening, photography, natural history and technology. She and husband Don share a book-cluttered little home with two lazy old black cats named Kali and Reason. 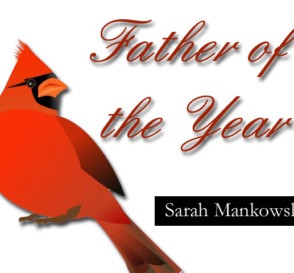 Father Of The Year Sarah Mankowski I could hear a frantic flapping when my neighbor placed the shoebox into my hands. He had found the fledgling cardinal on the road. She was lost and frightened, and it would be impossible …
Sarah Mankowski|November 12, 2018|