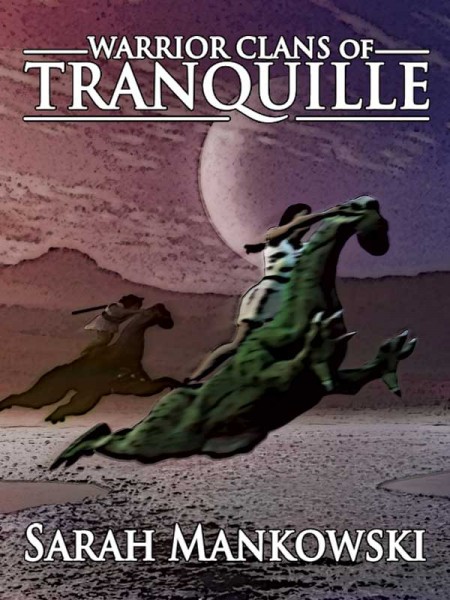 Eb must marry the warrior Lantomar, although she loves the healer Gauger. She dare not disobey her clan. Governed by fear, shrinking from danger, how much she risks by retreating into unreality.

Think with your own mind

After becoming marooned on a primitive planet called Tranquille, the settlers leave 500 helpful hints about building peaceful communities. They do not want their offspring to descend into savagery. This is well and good except sometimes a hint may obtain the force of law. Meaning may become twisted for personal gain. Indeed, one innocuous hint is so grievously distorted that it becomes the basis for creating a servant-class called doubtlings.

Warrior Clans
For twelve generations Tranquille’s tiny human population has battled an alien menace that it scarcely understands. The families willing to protect the communities must breed warriors to fight the ever-relentless earts.

Eb must marry the warrior Lantomar, although she loves the healer Gauger. She dare not disobey her clan. Governed by fear, shrinking from danger, how much she risks by retreating into unreality.

Eb and Gauger, and a clobclip called Folly
Eb is frightened of many things, even though the daughters of the warrior clans are taught never to know fear. She loves Gauger, although to love a doubtling brings disgrace. Gauger has spent most of his life in the valley learning to become a healer and to seek healing chloros. He loves his work, but he is also devoted to Eb. Should he leave the valley to serve Eb and the warrior whom she must marry? Adventurers at heart, can duty really keep Eb and Gauger from unraveling some of the stranger mysteries of Tranquille?

Warrior Clans of Tranquille is the first book in the phantomworlds series.

From the Author: The settlers of Tranquille emigrated from every continent on Earth. The blood of all the races courses through the veins of their offspring. They are human, evidencing the best and the worst of what that word suggests. They are confused, conflicted, brave, scared, helpful, hurtful, loving, lustful, but mostly muddling through life on a planet they scarcely comprehend.

The concept of the settlers’ hints came to me after viewing one-too-many inspirational meme on Facebook. Harmless, to be sure, but if similar platitudes were passed along as instruction, how long before the descendants distorted the meanings or solidified the words into law?

Warrior Clans was great fun to write. While I could never be brave enough to ride a clobclip, I sure did enjoy making Folly’s acquaintance.

As always, I appreciate feedback from readers.